When I speak to beekeeping groups I always recommend using some of your commuting travel time or your free time by listening to a Beekeeping Podcast.  The average commute time for workers in the U.S. is 45 minutes which can be just enough time for one episode.  You can search the various podcasts for a special topic or person you want to learn about, or just listen to all the downloads one at a time.  Listening to a podcast a few at a time is easy if you have a smart phone.  Start by looking for the podcast icon on your phone.

Or you can use a dedicated podcast app such as Stitcher. Then use the search button to find beekeeping podcasts of interest and SUBSCRIBE, then download one or more episodes.  There are many interesting sites including Bees & Such, Kiwimana Buzz, The Contrary Beekeepers Show, etc.   My favorite is The Beekeepers Corner or BKCorner podcast by Kevin Inglin.

There are several reason his shows work for me. Kevin is so calm, smart and rational! His 162 podcasts,  ….. so far,….  reflect his 10 year journey from novice to EAS Master Beekeeper and his research into each topic is meticulous!  He tries out products and reports on their usefulness.  Best of all, Kevin speaks slowly and in a deep voice, so you can set your listening mode to 1 1/2 speed and get a 1 hour podcast done in 40 minutes.

Using the show notes by going to the podcaster’s website lets you find specific information you might want to hone in on  or specific people who have been interviewed. For example you will find me interviewed on BK Corner episode 107 or on Kiwimana Buzz episode 99.   (Randy Oliver is on episode 61 KMB).  If you need to skip ahead on BK Corner to pass up the “Local Hive Report” you can fast forward or start listening 10 or 15 minutes into the podcast.  Or you can use the 15 or 30 second reverse  and forward buttons to go back or forward.

http://www.bkcorner.org/  One great feature of the BK Corner website is the detailed listing of each topic covered.  This is in the episode “SHOW NOTES” and lists the time sequence for each separate topic.  And one of the best features is quick access to hyperlinks for each product mentioned.

I hope you can enjoy a podcast soon!  Who can not be inspired by the intro music on The BK Corner by Huey Lewis and the NEWS ?

Tired of climbing ladders and trees or using bucket poles to catch your swarms?  Make and keep a Swarm Scion!

Beekeeping365 blog site has a super post on the scion if you are interested in learning how it works and how to make your own.  Here is one style using a rope and pulley:

The Russian Scion (stick or post) is a great tool for collecting swarms from your own bee yard.  Let’s face it – sometimes swarms happen in spite of swarm control measures.  The natural reproductive instincts of the bees are always present so sometimes you have to go with the flow.  Swarming behaviors vary – for example Russian bees are more swarmy than Italians.  As a comparison unmanaged Italian bees may swarm three times a year – Russian bees seven times.

Catching swarms is fun, but retrieving them from their first landing point can be difficult.  The swarm scion solves this problem by giving the swarm their best choice for the initial congregating point.  In any given bee yard swarms tend to have a favorite tree or limb anyway.  Previous swarms sometimes coat the bark with fresh wax and this is a marker that draws them back year after year.  When you have a chance read the great post on scions from the Beekeeping365 blogsite:

Whatever method you use to build a scion you can bait it with a frame of comb or just coat the under-roof section with propolis and wax. For a final touch mount a motion detector on the pole to alert you when a mass has arrived on your scion.

The Chamberlain Motion Detector can also be used to alert you when skunks or other animals are bothering your bees.

Tonight, Sept 6, 2018, I will be speaking at the Bridgeport (Texas) Bee Club meeting and giving a presentation on Trap Outs.  There are many pros and cons and lots of tips and techniques that I will share, but I wanted to make a quick note about this and post a link to Whimpy (Cleo) Hogan’s excellent description of his trap out box (also sold by Kelley Bees as the Swarm Harvester). 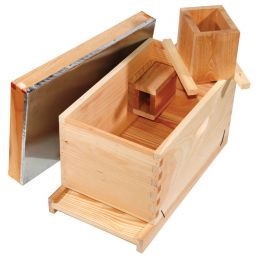 With kind thanks to Whimpy Hogan of Park City, Kentucky!

My friend Dr. Larry Connor always says the best time to graft queen cells is when the black locust is blooming.

I thought I would miss that unique signal now that I have moved to the western edge of those ecoregions that support pseudo acacia  (commonly known as black locust).  But as luck would have it I found a single grove of black locust here in Wise County, Texas, about 40 miles northwest of Dallas Fort Worth metroplex.  Immediately I called our local Master Beekeeper candidate (Donnie John) to show him and he was as excited as I was!  There is nothing like standing in a grove of blooming black locust.  The look is dreamy, the aroma is heavenly, and the bees are loving it!  Keep an eye out for this blossom as the honey gets top ratings in most blind taste tests.

In my presentations and in several articles I have described how to make nucs using the Doolittle method.  This involves moving brood without bees above an excluder and waiting hours or days for the nurse bees to come up and cover those frames, before removing them into nucleus colonies. This is often done with the addition of queens or queen cells.  The major improvement, however I suggest in my articles is to leave that brood above the excluder for 5 days, allowing all eggs and larva to mature past the point where the bees could easily select one of them to make their own queen.  This forces the bees to take the queen or queen cell that the beekeeper has introduced.  Nuc making after Spring and after the main nectar flow is over will achieve greater success if you use the Doolittle – plus 5 method.   (Thanks to the great Jay Smith who knew more about queens than any of us and shared his knowledge in books such as “Better Queens” ……  and thanks to James Nielson who discussed the Doolittle method at last night’s meeting of Bridgeport Texas beekeepers.)

Note: I wrote about this method in both Bee World and the American Bee Journal.  How I Use the JZ BZ Queen Cage

I just posted some new info under Cool Tools (Resources) you may find useful.

Many beekeepers believe queen rearing is a very technical and difficult process. Actually it is easier than you think.  There are a lot of good ways to do it.  Harvesting swarm cells in the springtime is one way, but to be in control of the process and get queens when you want them, the beek has to intervene & get the bees to do it on command. Moving the queen out of a strong colony by forming a nuc and keeping her in it is one way to get the bees to go into emergency queen rearing mode.

that essentially is removing the lower part of cells where eggs have just been laid.  Every 2nd or 3rd cell can be left intact and the bees will be able to quickly build the queen cells downward, as opposed to having to float the larva out to the edge of cell and then start the downward queen cell building.  Check out the OTS method at OTS Queen Rearing

and team in 2014 at Penn State University.  Sometimes it is called cell scraping.  The team there figured out that beekeepers can get direct access to newly hatched larva for grafting by scraping the wax off of black plastic foundation.  This really works, but I would like to offer some tips on the procedure.

The process is a bit temperature sensitive.  Later in the season when it is warmer the wax can melt into the cell base and obstruct access to the larva.  If it hot you can sit in your car or truck with the air conditioning on and still graft.  (My buddy Steve Rapasky taught me this trick.  He is the author of Swarm Essentials.)

Rite-cell black foundation from Mann Lake is my favorite because the plastic cell bases are a little deeper than that of other manufacturers.

Newly drawn comb on clean foundation works best.  When I am ready to make queens I find the queen and put her on the target frame and put a rectangle of #5 hardware cloth over her.  This allows the workers in and out but keeps her confined to the target area for egg laying.  This frame is kept in the center of the brood nest where she has been laying.  3 1/2 days later I come back and remove the frame.  Taking the frame to a safe place I scrape the wax off cells leaving the larva (of exactly the right age) which can be scooped up quickly and deposited in queen cups (conditioned in advance in a hive).

Keep a damp cloth over the cups and work quickly to keep the larva from drying out.  The cell frame is then placed in the cell builder hive for the initial build.  One day later the frame is either: 1) moved to a cell finisher colony or 2) the hive is converted to a cell finisher by removing the solid panel from the Cloake Board.  Bees tend to tear down capped queen cells over time if they are not protected or moved to an incubator. An inexpensive chicken egg incubator works well.

Frazier, Nino and Grozinger outline many of the details of the cell scrape graft method in “Grafting” , on pages 38 & 39 of Bee Culture Magazine, February 2015 edition.

For more encouragement in making your own queens be sure to read this Scientific Beekeeping article:  Queens For Pennies by Randy Oliver .

Grafting is fun and confidence builds with practice.  My friend Dr. Larry Connor told me during a 2008 queen rearing course: “Just go out and find a hive and practice grafting everyday, even if you don’t plan to use them!”